This project intend showing in a didactic and smart way the building sustainability index in real time in order to raise awareness among users of the importance of sustainable actions and reinforce the need for planning and actions aimed at reducing waste and optimizing resources.

The idea is to develop a controller that receives related sustainability data through EposMOTE network sensors, or also web services as date and time. With this data our cyber physical system will calculate the building sustainability index and monitor the tree color RGB, which ones will be chosen to give feedback.

According to the criteria raised , it means to be sustainable is not only economical, but also be comfortable, so that this color symbolizes the junction between economy and comfort, resulting in our sustainability ideal proposal.

UFSC (Federal University of Santa Catarina) has an intelligent building (Sapiens Park), which has a development in IoT (Internet Of Things).

In general, HVAC (Heating Ventiling Air Conditioner) are responsible for almost half of the energy consumption in buildings and running. Based on this, it sought to address this consumer with an alternative based on physical cyber systems.

At this point, it elaborated the solution model to follow:

The interface should inform the level of sustainability (low, medium or high) considering economy along with comfort, which is the analytical basis for the logic of the Fuzzy expert system. For this we used the following variables:

Because of the need for proximity to the logical database Fuzzy should be implemented in R as it is available and supported technology.

Fuzzy logic for handling a large volume of data, should be as close as possible to the information;

For now we define that data as a basis, but from the evolution of the project will include new parameters in order to increase the accuracy of calculation.

It was used fuzzy logic to implement this project in the process of making decisions about how much sustaintable the smart building is. The Logic process used to describe the algorithm was based on that table below:

The fuzzy logic algorithm implemented in the system is based on the following model:

The non functional specifications are based on the following list:

It must be connected o the Internet, because communication between the R server, Rails and Stree will be through this medium;

The size of the communication packet between the server and the EPOSmote should be small, i.e. below 200 kb, not to compromise the local band and operating in network instability times.

The sensors can not be directly exposed to forced measurement situations; as an instrument that causes fire on the temperature sensor or the humidification output of the air conditioner of the moisture sensor or a light reflector for a lighting or temperature, or an emitter of gas over a cabônico gas sensor;
The range of minimum and maximum performance of the sensors must be respected, along with the specification of correct operation of these sensors to be no erroneous measurements.

The tree LEDs can not consume a lot of energy, because it would go against the purpose of the project is sustainability. Logo should be used an efficient solution to interface to achieve the design requirements along with a more economic approach to the model; The same analysis should be drawn up for energizing the eposMOTE, with the same justification.

The lighting of the tree should not hinder in any specific activity of the building;
It also can not fail to be significant consideravalmente to comply with the requirements, then there is a consideration of the optimum brightness.

Processing, communication and storage of information can not pass the pre-stipulated time interface update, which is 1 minute;
The interface of both the stree Machine as stree App must be synchronized.

The site must be responsive.

The site should be available at least 17h daily.

The project site shows both the old data as the real time (updated every 1 minute) in the history.

The computational model of the project is expressed by the following diagram:

This kind of representation is necessary because as the objective of this project is to raise awareness among users of the importance of sustainable actions, it is necessary to expose the results in a striking way. It is not everyone that will be checking if they are sustainable or not via mobile app or via web, so this kind of thing brings the necessity of having an interface that explores this hole. The graphical interface is also important to checking these levels in everywhere at every time. It is important of having this app to collect and analyse the data in the graphics during long periods of collected datas. From this, it is possible to conclude some hipotesis from the routine in the aspects of sustainability and comfort. 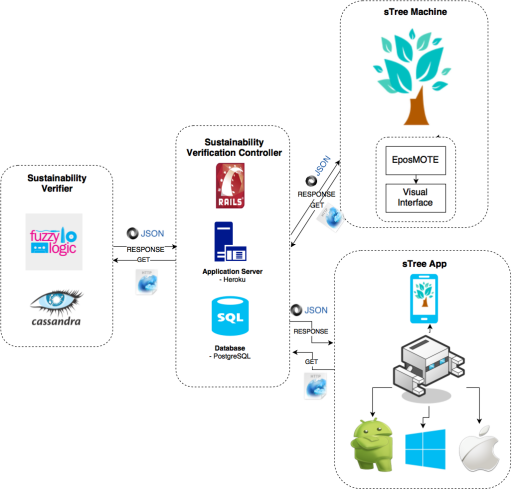 The stree-machine design should remember an Araucaria because this species is a Brazilian tree south of the country that is endangered, then it appears as an option to raise awareness about this issue;

The stree-machine must be made with recyclable materials to re-emphasize the role of sustainability in productive actions related to smart building.

The Embedded Parallel Operational System (EPOS) will run inside of EPOSMote III. We will use EPOSMote to control the collors of the phisical tree.

The hardware of the sensors and controllers must be eposMOTE III running epos operating system;

As previously mentioned it will be used a tree with LED RGB to give feedback to the user of the building. A tree was chosen because it is the symbol of sustainability.