The project will be composed by both the development of hardware and software. The hardware part will be necessary to improve the performance of the image processing component of this project, when compared to a solution entirely in software. An ideal platform for a first prototype should be an FPGA, where through the use of a hardware description language (HDL), a digital system to perform the hardware part can be synthesized, and also a softcore can be used to run the software. Another option would be the use of a development board with both an FPGA and a general purpose processor, possibly improving the overall performance.

Due to the laws and regulations of several countries, this project has to guarantee that the images captured by the camera will not  be utilized for other porpouses. One of the option is try to connect the digital system developed as close as possible to the camera’s CCD(Charge-coupled device), thus allowing a safer image processing and eliminating the risk of images being “leaked” to other systems and malicious softwares.

In the building automation area is of great interest to have a way to identify how many people are inside a room and also to determine their position at each instant. With this kind of information a system may be able to improve the configuration of cooling systems such as air conditioners, possibly also improving the energy efficiency of those systems.

The frames captured by the camera can be represented in the following resolution and frame rate:

Many algorithms used in the process of movement detection perform its actions in a pixel-base way. The algorithms usually make use of two nested loops, one traversing the lines and the other the colums. This way the total number of iterations executed for each frame is proportional to the resolution. Processing the frames in real time requires that the time processing one frame should not be higher than the interval between consecutive captured frames. Based on this information, it is possible to calculate how many iterations must be executed per second in each configuration provided by the camera:

In a sequential harware, with no paralelism, where each iteration is executed in a single clock, would result in clock rates between 5Mhz and 23Mhz. This simple model is unattainable. The movement detection is a complex process, and the entire chain of filters applied will probably impose a long critical path, not allowing these clock rates. Besides that, some of the filters must wait the previous filter be applied to the entire frame, making necessary separated loops. This way, a good way to approach the problem is through the use of pipeline, isolating different filters in different pipeline stages.

The memory needed is highly influenced by the resolution being used and the amount of frames that must be in memory simultaneously. Other factor, is that some frames in memory must be in the RGB representation, others only the luma component, or even only a binary representation (e.g. masks). Since most of the time the luma is the prefered representation, it is possible to suppose that is necessary a byte to represent each pixel. Video sequence is captured by the camera in the RGB color space. The problem with the RGB color space is that it has great sensitivity to sensor noise and changes of lighting conditions. Instead of using the RGB information, it is preferred to only use the luminance component during the algorithm. The formula to obtain the luma component from RGB information is shown below:

For a very simple algorithm, the background could be chosen as the FIRST FRAME obtained by the camera.

PROBLEM 1 - The first frame should only have static objects.
PROBLEM 2 - Static objects in posterior frames would be recognized as movement.

PROBLEM 3 - Movement pixels that shouldn't be in the background are still being added during the moving average filter.

To improve this, it is necessary to find a logic that respects the following rule:

This way, only the pixels that really do not represent any kind of movement are in the background. To achive this goal, this project use the following logic:

Since there are lots of random noise and light changes on the image recorded by the camera, only the significant pixel differences must be kept for the remaining of the algorithm. Besides that, we are not interested in the exact difference value, but only the information regarding the pixel having an significant difference or not, making a binary image enough to represent.

Closing is an image processing operation used to remove small holes from the objects in the image. In our project, it is really useful because the movement pixels usually are only located in the object boundary, and though the use of this filter, we can fill the object interior, so that it can be more easily recognized/detected in the next steps.

In this step we scale down the resolution of the frame. This step is useful to finish removing small holes in the objects, and by having a smaller resolution, the next steps of the algorithm can run faster.

The final step of the algorithm consist in detecting each individual object in the frame, and identify its center. Since this step requires some complex algorithms, we are using the Blob Detector provided by the OpenCV Library.

In dataflow models, the signals providing communication between the actors are sequences of message, where each message is called a token. Each actor in the dataflow model has a firing rule specifying the number of tokens required on each input port in order to fire the actor.

Since the firing of the actors is asynchronous, a token sent from one actor to another must be buffered; it needs to be saved until the destination actor is ready to consume it. Since one of the actors may fire on a higher rate, there must be a way to guarantee that the buffer will not overflow (one common problem in the dataflow model). Another common problem arises when there are feedback networks in the model, generating possible deadlocks, one actor in the loop has insufficient tokens to fire, but it will not receive any more token unless it fires because of the loop.

Considering two actor A and B with a single connection between them. The output of A is connected to the input of B. A fires at a rate qA, and B at a rate qB. A produces M tokens on each firing, and B consume N tokens. This way, a balance can be achieved by:

If this equation can be satisfied, it is possible to find a schedule that guarantees with a bounded buffer between the actors an unbounded execution.

8.2. Dataflow Model in our Project

The indoor positioning system can be described as a set of filters and manipulations applied on the frames received by the camera, in a way that in the end, the result is a matrix showing the locations of each person in the room.

In this way, each of this filters/manipulations applied in the frames can be seen as a separate actor. The idea on the project is to have all those actors implemented in hardware through the use of hardware description language. Since we are working with image frames, a matrix, we can define as one token, the value of one matrix position (eg. one pixel color).

In the current status of the project, we already can see, that some of the image filters (actors), can work on each received token (pixel), and others need to have one entire frame. The same happens to the output. Filters such as the grayscale, react on each received pixel, and produces a grayscale version of that pixel. A blob analysis filter may need a block of pixels (eg.: 8x8, 4x4) and produces a block with corresponding size.

In this sense the dataflow model fits really well in our project. Each actor filter waits the previous filter produce enough data before acting. In our project we also need to have a synchronous dataflow, in a way that if one filter work by pixel, it must operate in a rate number_of_pixels times the rate of an filter that operates on frames.

The only actor in our project that may discard data is our first filter, since not all frames produced by the camera need to be processed for our purpose. If the camera is working at 30fps, we can easily process only 1 every 3-6 frames and still have good results on detecting movement and counting people.

The problems faced during the implementation of this model in our project are:

Our idea for this project, is to have the initial filters synthesized in an FPGA. Basically we want all the blocks before the closing filter in the FPGA, since they have non complex logic, and can be implemented without the use of OpenCV library.

For this implementation we end up trying three different approaches. 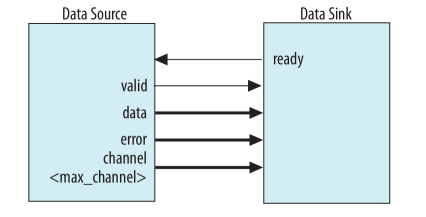 The Avalon Streaming protocol is a way to implement the dataflow model of computation. This protocol implements the communication betweent two blocks, one is the producer (Source) and the other is the consumer (Sink). The protocol has three mandatory signals:

Besides the mandatory signals, the protocol also define some optional signals, in the context of this project, it is important to mention the following:

This suite is a set of IPs distributed freely by altera that focus on image and video processing. This suite makes use of the Avalon Streaming Protocol for communication between the blocks, and also defines some guideline on how the packages should be enconded.

The first symbol sent in a package should identify what is the package type:

Another useful thing provided by the VIP Suite, is the testbench.

Using this testbench it is possible to verify if an IP follows correctly the avalon streaming protocol and the VIP packet definitions. The testbench works by loading a video file from disk, inserting pixel by pixel in the DUT, and saving the output in another video file. The testbench provides lots of options to test the DUT against invalid data, bad timing and other problems that may appear.